Get special discounts on quantity purchases of your favorite Whistleblower issues. For more information or to order at quantity discounts, please call WND Customer Service at 1-816-220-0359 or email support@wnd.com.

As they grow older, America’s children are systematically sexualized in government (“public”) school classrooms and after-school LGBT “support clubs,” as well as by ubiquitous transgender recruiters on social media platforms like TikTok. As a direct result, many children are seduced into “identifying” as the opposite gender, or a brand-new imaginary gender, and although too young to drive or vote, are convinced – and permitted – to take powerful drugs and hormones, and to have their healthy breasts amputated or to undergo chemical or surgical castration.

As if the rampant sexual abuse were not enough, alongside it are many other daily educational assaults on America’s youth: They are indoctrinated with toxic and corrupting Marxist ideologies like “critical race theory,” intended to condition them to hate and reject their own country, their parents, their faith, their race, their gender and themselves. At the same time, they’re being intentionally frightened of the future by being fed lurid, terrifying – and utterly groundless – apocalyptic tales of the imminent destruction of the world due to catastrophic, man-caused global warming. During the COVID hysteria, they were forced to wear useless and ineffective masks even outside, while engaged in sporting activities, causing some to collapse from oxygen deprivation.

And of course, things just get worse once the kids go off to college, probably the most deranged and toxic environment in the country, where young people are indoctrinated assembly-line style with Marxist ideology, intimidated into adopting perverse woke sensibilities and loyalties, and effortlessly drawn into immoral, self-destructive and hopeless lifestyles.

As a result of these and still other assaults on America’s young people, youth suicides have skyrocketed, as have depression, anxiety and other mental and emotional disorders. Even violent crime at an early age, something virtually unheard-of in previous eras, is becoming an increasing reality, as reflected in recent headlines, including “6-year-old student in custody after allegedly shooting his elementary school teacher in Virginia” and “12-year-old Oklahoma girl accused of stabbing her 9-year-old brother to death.”

Meanwhile, the synthetic opioid fentanyl, the No. 1 cause of death of younger Americans 18 to 45, destroys thousands of children annually. In fact, recently – making its first appearance just prior to Halloween – it has been disguised as candy (so-called “rainbow fentanyl”) so as to destroy as many kids as possible. The fentanyl crisis is largely a result of the Biden administration’s intentional and catastrophic demolition of border enforcement, essentially handing over the U.S.-Mexico border region to the terroristic Mexican drug cartels, who in turn profit massively from trafficking China-sourced fentanyl and other illicit drugs into America.

Moreover, the same cartels reap huge profits from facilitating (for a price) the trek of millions of aliens intending to cross the border illegally, a key feature of which is the rampant sexual abuse and/or sex trafficking of countless girls and young women attempting to make the dangerous trek into the U.S.

This multi-front war is intended ultimately to convert America’s next generation into a frightened, corrupted, ideologically brainwashed and therefore obedient version of the bright and moral people they were created to be. Make no mistake, the harm being done to children in this war is neither accidental nor collateral: Children are the primary target.

How can all this be happening in the greatest nation on earth? Who and what is behind it? And how can it be stopped?

That is the explosive topic of the entire January issue of WND’s critically acclaimed Whistleblower magazine, titled “WINNING THE WAR AGAINST AMERICA’S CHILDREN.”

* “Winning the war against America’s children” by David Kupelian

* “Teens buying deadly fentanyl on social media, and sales are soaring!” by Chuck Norris, who demands government do more to stop the deadly drug from entering the U.S.

* “8th-graders get assigned to list their favorite sex acts like pizza toppings: When caught, school claimed it was all a mistake – ‘incorrect version’ was sent out” by Kendall Tietz

* “How 'woke' schools and unions 'turned America’s education system on its head': 'When parents speak against this, they are targeted as extremists'” by Reagan Reese

* “Parental authority is the basis of civilization – and it has disappeared: How a culture's foundation hinges on the 5th Commandment” by Dennis Prager

* “What's behind the attacks on crisis pregnancy centers? Explaining the violence and rhetoric of 'pro-choicers' who can't tolerate others' choices” by Laura Hollis

* “Homeschooling in the U.S. has tripled since 2020: Hundreds of thousands of students forced to learn from home during COVID haven’t returned to public schools” by Bob Unruh

* “Will the ‘Quiet Right’ save America?”

* “The church's silence on the LGBT issue is hurting young people: 'How can we be compassionate without compromise?'” by Michael Brown.

Comments author and longtime Whistleblower Editor David Kupelian: “Bottom line, the far left exists in a state of mass delusion rooted in all-out rebellion against God and His laws. Indeed, the left literally violates all of the Ten Commandments every single day – not incidentally, but purposefully, since the core dynamic of the left’s operating system depends upon violating them: Therefore, they create false gods to worship while vainly pretending to venerate the true God, they teach children not to honor their parents, and kill innocent babies, and steal citizens’ wealth, and encourage and revel in sexual immorality, and continually ‘bear false witness’ against good people – and underlying it all, they covet all that is not rightfully theirs. Winston Churchill insightfully characterized this false religion by dubbing socialism ‘the gospel of envy.’”

Thus, adds Kupelian, “Because of this moral inversion, the left’s worst nightmare is a nation of kids raised learning about God and Jesus, and the Ten Commandments and the Sermon on the Mount, about the Golden Rule and about sexual morality and about righteousness. The radical left hates all of that with a blinding hatred, since Christian virtue represents an existential threat to the Marxist left, and always has.”

“This issue of Whistleblower explores the reality of the left’s all-out war on children – and some of the best, most inspired and effective solutions.”

SPECIAL OFFER: For a limited time, subscribe to Whistleblower, renew or give a gift subscription and you'll get $10 off the already discounted rate (pay only $39.95 instead of the usual $49.95), plus you'll get a very special free gift: 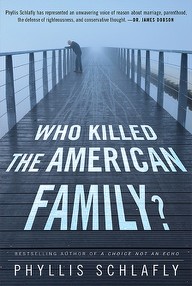 You'll get the classic book by legendary culture warrior Phyllis Schlafly, "Who Killed the American Family?"

American families are the backbone of this nation, explains Schlafly. The American family is the fundamental institution that provided the Founding Fathers with the emotional support and driving courage to face the tyrannical government that threatened their very existence. The American family used to be the fundamental institution of our stable, liberty-loving, and very successful society. It remains the essential building block of a free society with limited government. But in the last hundred years – and especially today – the American family has been attacked, debased, maligned, slandered and vilified by every facet of society.

We are faced by a rebellion against any sort of moral code. Indeed, "Who Killed the American Family?" reveals the concerted assault on the American nuclear family by many forces – from feminists, judges and lawmakers to psychologists, school districts, college professors and politicians offering incentives and seeking votes. The wreckage of the American family leaves us with the inability to have limited government because government steps in to perform tasks formerly done by the nuclear family.

Phyllis Schlafly, the veteran conservative activist and thought leader who led the charge to successfully defeat the Equal Rights Amendment in the 1970s, explains how changes in law, court decisions, culture, education and entertainment have eroded the once-precious institution. Schlafly not only exposes the tactical charge the Left has implemented against the family, but she offers hope and a plan for stopping anti-marriage incentives and how to restore in America’s culture the sacred nature of the family unit.

This special offer including a FREE copy of Phyllis Schlafly’s "Who Killed the American Family?" will end without notice and is good in the U.S. only.

If you prefer, you may order a single copy of the January 2023 issue, "WINNING THE WAR AGAINST AMERICA’S CHILDREN." Or GET THE DIGITAL VERSION HERE!