Readers routinely describe WND’s popular monthly Whistleblower magazine using phrases like “a light in a dark world,” “a breath of fresh air” and “dead-on and razor-sharp.” Talk radio hall-of-famer Barry Farber even called it “incredibly brilliant.” However … it also costs money to subscribe – and many people, especially in today’s era of Bidenflation, are reluctant to risk the subscription cost or even the single-copy price to try it out.

But how about this? Right now, to introduce more people to Whistleblower, WND readers can get FOUR sensational Whistleblower issues in the state-of-the-art digital edition – including the current all-important midterm election issue – all for a grand total of $1.

That’s right – $1. And if after 30 days of enjoying these four power-packed issues, you decide you want to subscribe and get the next 12 monthly issues coming to you, we’ll charge your credit or debit card for the discounted annual subscription price of just $24.95. And if you decide not to subscribe, just let us know by phone or email and you won’t be charged anything (see details below).

Long relied on by thousands of WND readers, Whistleblower provides some of the best, smartest and deepest insights into a nation, culture and world spinning totally out of control. At a time when one major political party has essentially gone mad – openly championing policies that are not merely insane, but suicidal – and yet most of the news media wildly cheerlead these ever-more-extreme progressive mass delusions, Whistleblower is one of the very few places to get a large and reviving dose of rare truth, insight and solutions every month. Subscriptions also provide essential financial support to WND, the pioneering online news organization under brutal assault from many directions, especially from today's far-left Big Tech internet gatekeepers.

So here’s the deal: As soon as you place your order today for only $1, we will immediately email you the digital editions of the current issue, as well as our most recent three issues, all on electrifying topics no one else covers like Whistleblower.

IMPORTANT: THIS $1 SPECIAL OFFER REQUIRES PAYMENT BY CREDIT CARD, NOT PAYPAL. THANK YOU.

Here's a look at the four issues you'll get: 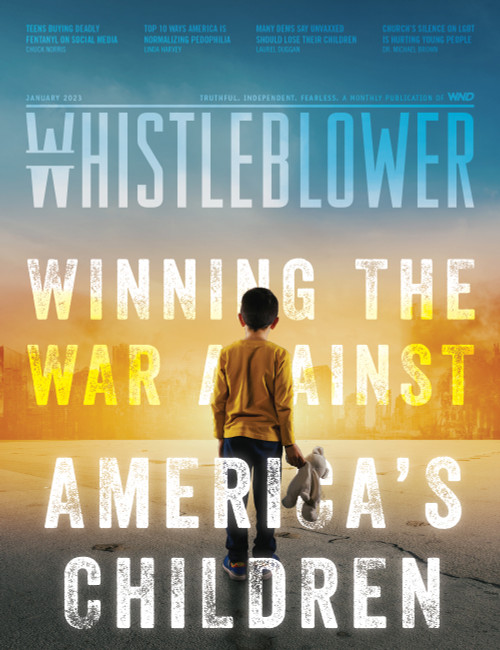 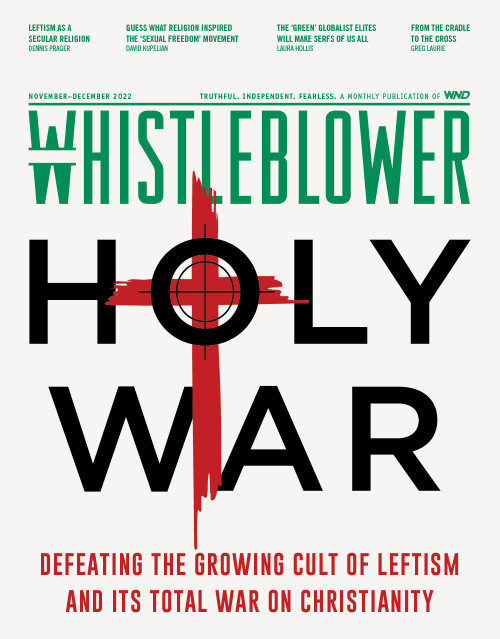 To right-thinking Americans attempting to make sense of a nation seemingly gone mad, it’s becoming increasingly clear that the deranged – and often demonic – leftwing political and cultural movements currently capturing the minds of millions of Americans are nothing short of full-fledged cults.

Their profoundly negative effects are inescapable: Repeated polls confirm that the “Climate Change Cult,” with its hysterical indoctrination of America’s school kids, has caused a staggering three out of four young people to fear the future, so great is their concern that the world may soon come to an apocalyptic end. Even many married couples say they will not bring any children into such a cursed and short-lived world. And of course, much of the globe is freezing this winter because of the “Climate Change Cult’s” mass-suicidal war on fossil fuels. Never mind that 1,100 scientists and scholars recently signed a document affirming “There is no climate emergency.” 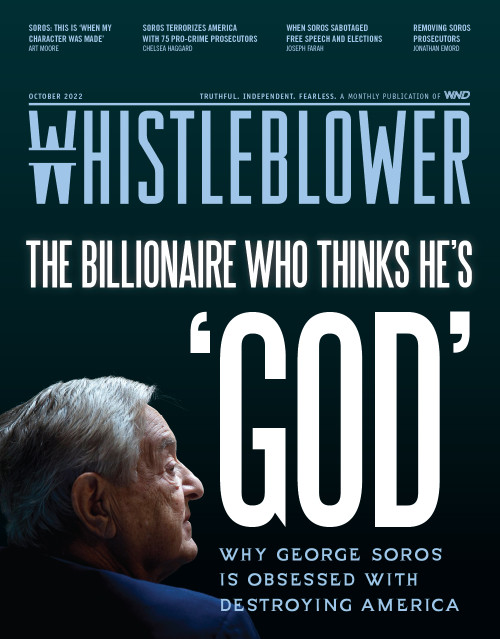 "THE BILLIONAIRE WHO THINKS HE'S 'GOD': WHY GEORGE SOROS IS OBSESSED WITH DESTROYING AMERICA." Even though conservatives generally regard him as akin to the evil emperor in "Star Wars," the empire's shadowy and malevolent behind-the-scenes power, George Soros simultaneously represents the lifeblood – indeed, life itself – to hundreds of organizations on the far left. They see him as a messianic figure, a revered leader, a godfather – almost a god, who provides good things for his children. indeed, Soros admits he wants to re-create the world in his image – like a god. That characterization is not opinion, hyperbole or rhetorical flourish: Living out his “messianic fantasies” and openly likening himself to a “some kind of god” is precisely how George Soros – ironically, an atheist and self-hating Jew – describes himself in his more candid moments.

“STOPPING THE MADNESS: A MIDTERM ELECTION GUIDE FOR VOTERS WHO LOVE AMERICA.” With what has been called the “Sovietization” of the Biden administration – including the shocking criminalization of dissent and massive weaponization of the FBI against political opponents – America is being increasingly compared to a third-world or communist dictatorship. Yet America still has one sacred institution that dictatorships from Zimbabwe to communist China don’t have: ELECTIONS. And in reality, there is no reason, despite the regime’s all-out efforts at election rigging, that the tens of millions of decent, right-thinking American voters cannot stop the Biden administration’s ever-expanding madness this November. This Whistleblower issue insightfully covers the most electrifying and important races, illuminates the biggest issues, reveals how the latest federal takeover of elections actually violates the law, and much more.

What top conservatives say about Whistleblower

* "[Whistleblower Editor] David Kupelian is one of the most thought-provoking and iconoclastic writers I know. Agree or disagree, David is a must-read if you really want to understand the world we live in and where it's headed." – Sean Hannity, host of both Fox News Channel's "Hannity" and "The Sean Hannity Show"

* “The concept of ‘Bizarro America’ – a nation morphing into its opposite … BRILLIANT!” – Rabbi Jonathan Cahn, author of “The Harbinger” and other top bestsellers, including most recently “The Return of the Gods”

* "Whistleblower is amazing. It attacks the news with an armored division, not a bb gun. Other newsmagazines tend to be nice selections of nice little stories, but every month Whistleblower targets one single topic that is monumentally affecting our lives and stays laser-focused on it throughout the issue. And what a fantastic and enjoyable read!" – Barry Farber, legendary radio talk show host and member of the National Radio Hall of Fame

'I saw the pictures and read the articles. It crushed me.'

Following are representative comments from long-time Whistleblower subscribers as well as new readers, like this first one received just recently:

* “Just got my first issue of Whistleblower Magazine and read it cover to cover. So glad to have found this. Don't feel quite so alone. Thank you.” – Susan

* "I devour every issue of Whistleblower. It is literally a breath of fresh air." – Dick

* "Your analysis was so dead-on and razor-sharp – the 'quick, powerful, sharper than any two-edged sword, dividing asunder, discerning thoughts and intents' kind of sharp. I was so convicted that I couldn't even finish the article without letting you know its God-sent timeliness.” – Sharon

* "How good it is to see the truth being published fearlessly and courageously. You and your publications are a light in a dark world and you have well earned my trust." – Bill

* "I received my first issue of Whistleblower magazine in the mail recently. I was completely blown away!!! I had no idea that there was a magazine out there with the same concerns that I have." – Stephanie

* "I read your issue on abortion and can only tell you that it has changed my life. I'm a conservative Christian woman but have always opted to believe that each of us are responsible for our own lives and relationship with God and that projecting our beliefs on each other isn't a loving, understanding way to live. Then I saw the pictures and read the articles. It crushed me. For the first time in my life, I will feel no compunction in openly disagreeing with those in favor of abortion rights. Thank you for this powerful information." – Kathy

* "Your understanding and perception have amazed me." – Ron

Says Kupelian: "We have tried to make this offer so appealing, such a no-brainer – I mean, one dollar – that everyone reading these words might consider trying out Whistleblower for themselves. I earnestly hope you will. Let me also point out that not only is Whistleblower, which I have put together every month since it started in September 2001, as good as the readers quoted here say, but it also represents an absolutely vital part of WND's financial support base. As you may know, WND has been under sustained brutal assault by Big Tech, which it seems would love nothing more than shutting us down completely. We don't intend to allow that to happen. Please help us by trying out Whistleblower at our lowest price ever."

OFFER DETAILS: For this very special $1 offer, you will receive FOUR digital issues of Whistleblower. If after 30 days of enjoying these four issues you wish to receive digital Whistleblower every month for the next year, do nothing and your credit or debit card will be charged the discounted annual subscription rate of only $24.95. (There's no risk, because at any time you can cancel your subscription for a full refund on the unused portion.) If you don't want to subscribe, simply cancel by calling 816-220-0359 or by emailing cancel-trial@wnd.com within 30 days after signing up for this special $1 offer.

Please note: If you like the free issues and do subscribe to digital Whistleblower for one year, when your subscription eventually expires, you'll receive a renewal notice from us. To keep digital Whistleblower coming at that point, do nothing and we'll renew your subscription automatically at just $24.95 by charging your credit or debit card. Or just go online or call and cancel if you wish. As always, there's never any risk, as you may cancel at any time for a full refund of the unused portion of your subscription.

IMPORTANT: THIS $1 SPECIAL OFFER REQUIRES PAYMENT BY CREDIT CARD, NOT PAYPAL. THANK YOU.

THIS OFFER MAY EXPIRE WITHOUT NOTICE, SO GET 4 ISSUES OF WHISTLEBLOWER FOR ONLY $1 NOW!

WINNING THE WAR AGAINST AMERICA’S CHILDREN

Get special discounts on quantity purchases of your favorite Whistleblower issues. For more information or to order at quantity discounts, please call WND Customer Service at 1-816-220-0359 or email support@wnd.com.

The Return of the Gods (Hardcover)