SPECIAL OFFER: For a limited time, renew your Whistleblower subscription and you'll get $10 off the already discounted rate (pay only $39.95 instead of the usual $49.95), plus you'll receive THREE very special free gifts! 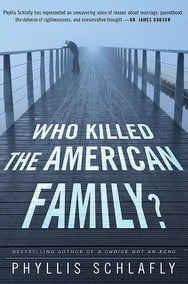 In recent decades, the American family has been mercilessly attacked, debased, maligned, slandered and vilified by every facet of society, fueled by a seemingly mindless rebellion against any sort of moral code whatsoever.

But, who's responsible for these ongoing attacks that have literally ripped apart the fabric of the greatest nation in history?

Phyllis Schlafly – considered by many to be "the most consequential female" in public policy in the last 50 years – has the answer.

For America, everything hinges on the family. The American family is the fundamental institution that provided the Founding Fathers with the emotional support and driving courage to face the tyrannical government that threatened their very existence. It is the essential building block of a free society with limited government.

Fortunately, Schlafly not only exposes the tactical charge the left has implemented, but she offers hope and a plan for restoring in our culture the sacred nature of the family unit.

Second, you'll get the coveted print edition of one of Whistleblower’s most popular issues ever, “YES, THE 2020 ELECTION WAS STOLEN: How Big Tech, Big Media, lying Democrats, deep staters and vote fraudsters cheated Trump – and America.” From rampant voter fraud, to Google inducing 6 million “undecided” voters to support Joe Biden, to social media and news organizations and the “deep state” working together to suppress damning revelations about Biden family corruption just before the election, to the Democrat-Media Complex's underlying message that election fraud is not just morally permissible, but morally essential, because “Trump is another Hitler,” this special issue of Whistleblower presents a powerful and groundbreaking case that the November 2020 presidential election was the most corrupt in generations.

Finally, you’ll receive the digital version of one of the most devastatingly powerful journalistic takedowns of the abortion industry ever, Whistleblower’s epic “STOP KILLING BABIES” issue. For decades the abortion war has raged, each side winning and losing battles in the courts and legislatures. Yet the net result – despite Americans' consistent and overwhelming opposition to unfettered abortion-on-demand – has been the slaughter of well over 63 million American children, a number equal to almost one-fifth of the current U.S. population. However, the abortion war is building to a climax, with the Supreme Court likely to soon revisit Roe. V. Wade, and this special issue of Whistleblower peers into the future to predict the ultimate outcome.

This special triple free offer will end without notice.

The War on Police: How the Ferguson Effect is Making America Unsafe (Hardcover)