SPECIAL OFFER: Subscribe to Digital Whistleblower and get your choice of any one of these sensational, best-selling e-books FREE!

That's right, in addition to our traditional print edition of Whistleblower, postal mailed to subscribers each month, readers may now choose to have Whistleblower emailed to them in digital form. Online Whistleblower is handsome, exciting and state-of-the-art.

October 2022 – THE BILLIONAIRE WHO THINKS HE’S ‘GOD’: Why George Soros is obsessed with destroying America

The name “George Soros” is typically preceded by the words “billionaire philanthropist.” But there’s a problem.

Philanthropists donate money and property to needy individuals and institutions for the purpose of advancing human welfare, security and happiness. Indeed, with its anthro root, philanthropy literally means "love of mankind."

Currently, Soros’ name is most often heard in conjunction with radically pro-criminal district attorneys across America, many of them household names due to the spectacular explosion in violent crime they have enabled: “Soros DA Larry Krasner” (Philadelphia), “Soros DA Kim Foxx” (Chicago), “Soros DA Chesa Boudin” (San Francisco) and scores of others, from George Gascon (Los Angeles) to Marilyn Mosby (Baltimore) to Kim Gardner (St. Louis), 75 in all – each elected because of massive infusions of Soros cash into their campaigns. In turn, the “Soros DAs” have transformed America’s most beautiful, dynamic and storied cities into degraded, crime-infested hellscapes of skyrocketing murder, rape, robbery, rioting, arson, drug abuse, wild mass-shoplifting episodes and other mayhem, leading not only to widespread property loss, suffering and death, but also to major exoduses by those with the means to relocate.

And yet, radical-progressive prosecutors constitute just one recent manifestation of Soros’ “philanthropy.”

He also wants to legalize drugs, he supports euthanasia, and he funds Black Lives Matter. He is for socialism and globalism and open borders and “defunding the police.” He's for devaluing America's currency – once telling the Financial Times that “an orderly decline of the dollar is actually desirable” – even though that amounts to an outright theft of Americans’ life savings and investments. He favors the destruction of American sovereignty in favor of “global governance.” He doesn't like Israel and has supported her enemies. He detests truthful news coverage and funds organizations that daily attack the only free press America currently has.

In short, if it's immoral, subversive and anti-American, Soros favors, organizes and funds it. If it's noble and freedom-producing, like free markets and constitutional government, he sets up and funds organizations to undermine and destroy it.

Why? What is really going on inside the mind and soul of George Soros?

‘Messianic fantasies … the creator of everything’

Even though conservatives generally regard him as akin to the evil emperor in "Star Wars," the empire's shadowy and malevolent behind-the-scenes power, George Soros simultaneously represents the lifeblood – indeed, life itself – to hundreds of organizations on the far left. They see him as a messianic figure, a revered leader, a godfather – almost a god, who provides good things for his children.

Indeed, Soros admits he wants to re-create the world in his image – like a god. That characterization is not opinion, hyperbole or rhetorical flourish: Living out his “messianic fantasies” and openly likening himself to a “some kind of god” is precisely how George Soros – ironically, an atheist and self-hating Jew – describes himself in his more candid moments.

“I fancied myself as some kind of god,” Soros once wrote. “If truth be known, I carried some rather potent messianic fantasies with me from childhood, which I felt I had to control, otherwise they might get me in trouble.”

When the British online newspaper The Independent asked Soros to explain these extraordinary statements, he responded: “It is a sort of disease when you consider yourself some kind of god, the creator of everything, but I feel comfortable about it now since I began to live it out.”

In his book, “The Bubble of American Supremacy,” Soros proclaims that America is a “threat to the world,” run by a Republican Party that is the devil child of an unholy alliance between “market fundamentalists” and “religious fundamentalists.” America has become a “supremacist” nation, he says.

As Soros told the New York Times in 1994, “I am something unnatural. I’m very comfortable with my public persona because it is one I have created for myself. It represents what I like to be as distinct from what I really am. You know, in my personal capacity I’m not actually a selfless philanthropic person. I’ve very much self-centered.”

Confiding to his biographer Michael Kaufman, Soros said: “I am kind of a nut who wants to have an impact.”

It gets worse, believe it or not.

“Next to my fantasies about being God, I also have very strong fantasies of being mad,” Soros said on British television. “In fact, my grandfather was actually paranoid. I have a lot of madness in my family. So far I have escaped it.”

Except he hasn’t “escaped it.” Not only has George Soros succumbed to a form of total madness, but he’s imposing his insanity on the United States of America.

After all, his motto for changing society is simply, “If I spend enough, I will make it right.” Combine that with his proclamation in his 1995 book, “Soros on Soros” – “I do not accept the rules imposed by others. ... And in periods of regime change, the normal rules don’t apply” – and you have a formula for truly epic madness and societal destruction, imposed on hundreds of millions of people, by a super-wealthy atheist who thinks he’s God.

All of this, and much more, is explored as perhaps never before in the latest issue of WND’s acclaimed monthly Whistleblower magazine, titled “THE BILLIONAIRE WHO THINKS HE’S ‘GOD’: Why George Soros is obsessed with destroying America.” 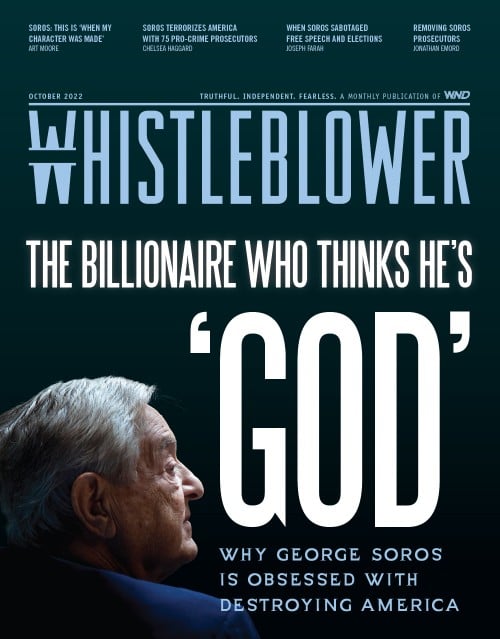 Highlights of “THE BILLIONAIRE WHO THINKS HE’S ‘GOD’” include:

* “George Soros: The man who would be ‘god’” by David Kupelian

* “Soros: This is ‘when my character was made’” by Art Moore, revealing the Jewish billionaire investor’s chilling Nazi-occupation drama

* “Soros to Big Tech: Censor ‘disinformation’ before midterms!” by Bob Unruh, which also reprises how “Big Media and Big Tech stole the 2020 election, throwing it to Joe Biden”

* “George Soros declares war on Supreme Court and Republican Party: Claims these ‘domestic enemies of democracy' pose a greater threat to America than China and Russia” by Art Moore

* “George Soros terrorizes America with 75 pro-crime DAs” by Chelsea Haggard, on the multi-billionaire’s ongoing plot to undermine and radically transform America’s justice system. Despite the resulting explosive crime, Soros says, “I have no intention of stopping”

* “Disastrous 'Defund the Police' movement fueled by Soros” by Andrew Jose. “Crusade backfired spectacularly as crime skyrocketed – unless that was the objective”

* “Why Soros-backed St. Louis prosecutor was removed from McCloskey case” by Bob Unruh. The couple was charged with displaying weapons while being threatened on their own property by hordes of trespassing BLM protesters

* “Soros' cash helps 'flip' evangelicals away from Israel” by John Aman, who explains the ongoing influence of the Telos Group and its tours to the Holy Land

* “Removing Soros prosecutors: They swear the oath with tongue in cheek – and then violate it” by Jonathan Emord.

“This issue of Whistleblower,” says author and longtime Whistleblower Editor David Kupelian, “is focused like a laser on George Soros, the man and his ‘philanthropy’ aimed at subverting U.S. elections, suppressing free speech and a free press, attacking America’s bedrock institutions, ‘defunding’ law enforcement, turbo-charging illegal immigration, ending American sovereignty and much more. It even includes an extensive and highly revealing 8,000-word report on the Soros-funded prosecutors who have turned America’s criminal justice system upside down – and are just getting warmed up, unless voters replace or recall them.”

SPECIAL OFFER: Subscribe to Digital Whistleblower and get your choice of any one of these sensational, best-selling e-books FREE!

If you prefer, you may order a single copy of the October 2022 issue, "THE BILLIONAIRE WHO THINKS HE'S 'GOD'" Or GET THE DIGITAL VERSION HERE!

The Restitution of All Things: Israel, Christians, and the End of the Age (Hardcover)

The Word: The History of the Bible and How it Came to Us (Hardcover)